Dr. G. Terence Meaden devised The International Tornado Intensity Scale in 1972 to categorize wind speeds of tornadoes. The scale is directly related to the Beaufort Scale and is the only true tornado intensity scale with a sound scientific base.

For information on the origins of the Tscale and how it was devised visit the T Scale Origin page.
For a demonstration of why this is the only accurate scale see the ECSS 2004 presentation (Terence Meaden).

The scale allows a tornado's wind speed to be determined by various means: Few anemometers have survived even the weakest tornado to record a peak gust and few engineering studies of tornado damage have been made. Furthermore not many observers have been close enough for Doppler measurement. Consequently most ratings are derived from the least accurate method of a non-engineering based study of damage. Nevertheless, it is important to note that the International Tornado Intensity Scale based on sound scientific formulae allows tornadic winds to be rated even if a tornado has no opportunity to cause damage (as when crossing open countryside for instance). Thus the TORRO scale is a true tornado wind speed intensity scale rather than purely a damage scale.

The T Scale is precise. It is well-suited for the more accurate methods of tornadic wind speed determination and also for rating weak tornadoes which account for the vast majority of global events. It is relatively easy for a basic non-engineering study of damage to produce a reasonably accurate rating of damage caused by a weak tornado because the wind speeds are relatively low. Conversely, rating strong tornadoes becomes harder and the precise nature of the scale makes the accurate rating of violent tornadoes by viewing the damage caused particularly difficult. To reduce this, adjacent points on the scale can be grouped together â thus T5-6 is acceptable as a rating. 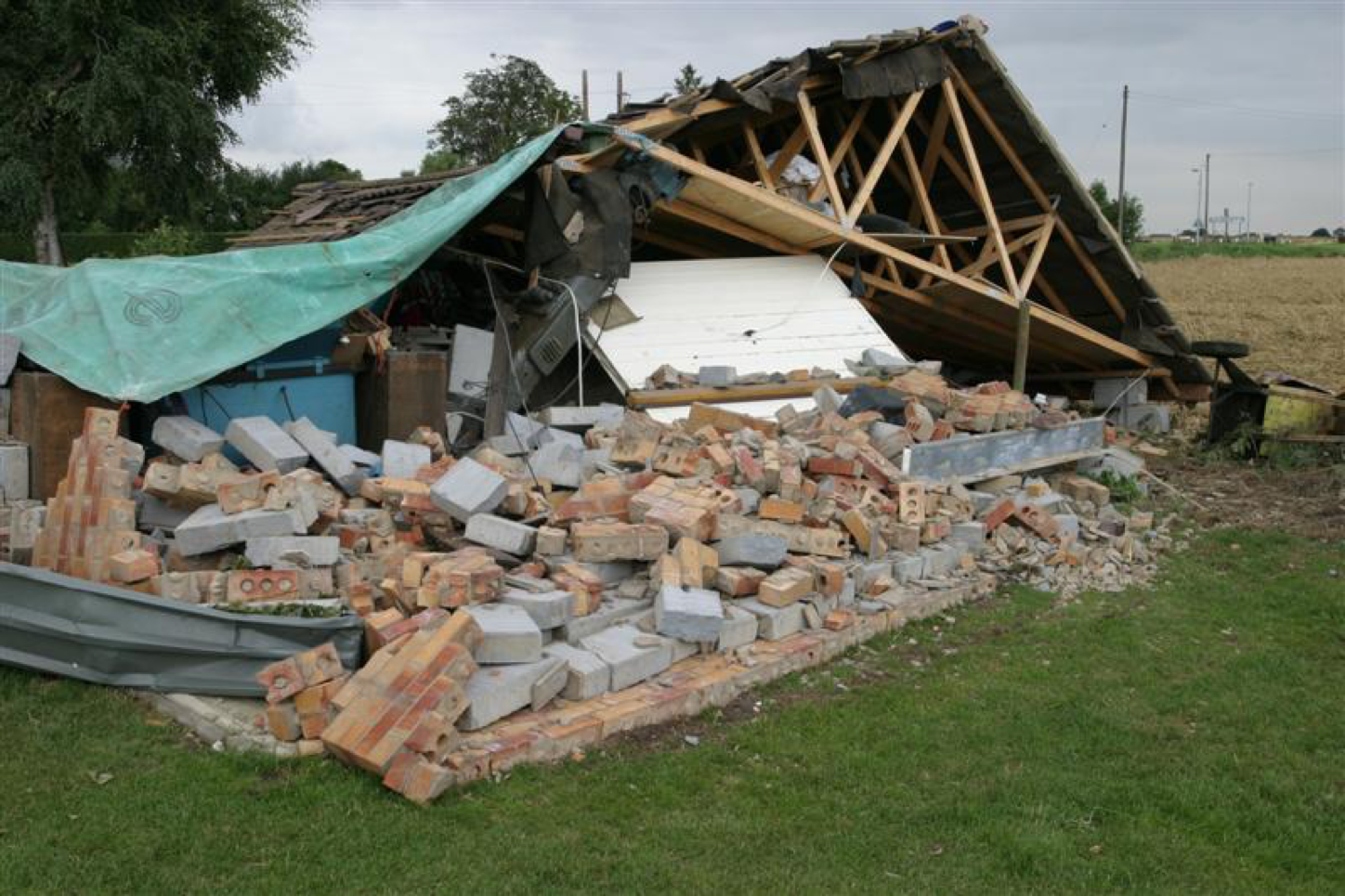 Damage caused by a tornado rated T3 near Peterborough on 28 July 2005 (Credit: Stuart Robinson)
A tornado is only rated T0 if it passes over vulnerable objects, which are not damaged (leaving aside the more accurate methods of determining wind speeds in this instance). If a tornado is known to have occurred but details of damage or other rating information are not forthcoming, then the tornado is not given an intensity rating. Whenever information is available to provide an intensity rating, the qualifying value is the one corresponding to the tornado at its most intense.

Care is given to the rating of slow-moving tornadoes, because they will create more intense damage than a faster-moving tornado of the same wind speed. In such cases, if there is no other information available to give an intensity rating, the scale number to be used will be lower than what usually corresponds to the observed damage.

As a true wind speed scale, the T Scale can be applied to determine any wind speed, whether the wind is tornadic or not.

The table below highlights the International Tornado Intensity Scale, where tornadoes can be rated on separate wind speed, track length, track width and track area categories. For instance the 7 December 2006 Kensal Rise, London, tornado was found by Kirk (2014) following a site investigation to be rated T5, L4, W6 and A5...

Because the Tornado Scale is open-ended, it can be extended beyond T10 using the formulae below where v = wind velocity, T = Tornado Intensity number, and B = Beaufort Force number.