The origin of tornadoes is often associated with well-developed thunderstorm cells on cold fronts, for example at the gust-front boundary where an advancing mass of cold air overruns and displaces pre-existing warmer humid air. Within a cell a strong persistent updraft of warm moist air is maintained as air enters the forward right flank at low altitude. As the air ascends it is forced to turn due to the variation of wind speed with height (known as vertical wind shear) and due to its proximity to a downdraft of drier cold air. By this means, the buoyant warm updraft acquires rotation in an anticlockwise sense as it undergoes local stretching in the vertical. The spinning, spiralling effect gradually extends along the length of the updraft, and the speed of rotation or âtwistingâ increases as the effective column diameter diminishes.

Just as water exits from a bath more efficiently by spinning down the plug hole, so the humid rising air is carried more effectively through the cloud cell in the form of a spinning updraft. Another way of expressing it is by recognizing that the tornadoâs high wind speeds are the result of convergence because angular momentum has to be conserved. An analogy is the way in which an ice-skater increases his or her rate of spin (thereby providing a convergence of mass) by drawing in the arms. The upward flow of air in the tornado being greater and faster than inflow at the base ensures a reduced pressure for the rotating updraft.

When the column is seen extending visibly beneath the cloud base as a funnel cloud, it is because water vapor is condensing into its outer sheath due to falling pressure and temperature. Eventually, given enough time and a high-enough rate of spin and stretching, the tornadoâs funnel lengthens to the ground, and with it come the high-speed potentially-damaging winds. By contrast, winds in the limited area at the middle of a tornado funnel are light, if not approaching calm at the epicentre, as with the eye of a tropical storm or hurricane.

In the most intense storms known as supercells, winds in the lowest three kilometers of the atmosphere veer strongly with height and produce, relative to a horizontal axis, vorticity of the inflow towards the updraft before tilting into the vertical and becoming a fiercely-spinning column of air. At the same time in such meteorological conditions a mesocyclone can develop in which the entire cumulonimbus, often 10 kilometers across, rotates with a strong sustained updraft.

A tornado will typically last for a few minutes, track across the land for 2 to 5 kilometres (roughly 1 to 3 miles) and will have a diameter of 20 to 100 metres (roughly 20 to 100 yards). Windspeeds are in the order of 72 to 113 miles per hour - that is, T2 or T3 on the Tornado Intensity Scale. At the more extreme end, some tornadoes track for over 100 kilometres, are over 1 kilometre wide and have winds in access of 300 miles per hour (T10) - such tornadoes are extremely rare, anywhere in the world.

In contrast, a hurricane is an intense area of low pressure that only forms in the tropics where the sea surface temperature is at least 27 degrees Celsius. A hurricane has a diameter of around 100 miles, has mean windspeeds which must average at least 73 mph (by definition), and can last for several days - but will rapidly decay on making landfall. 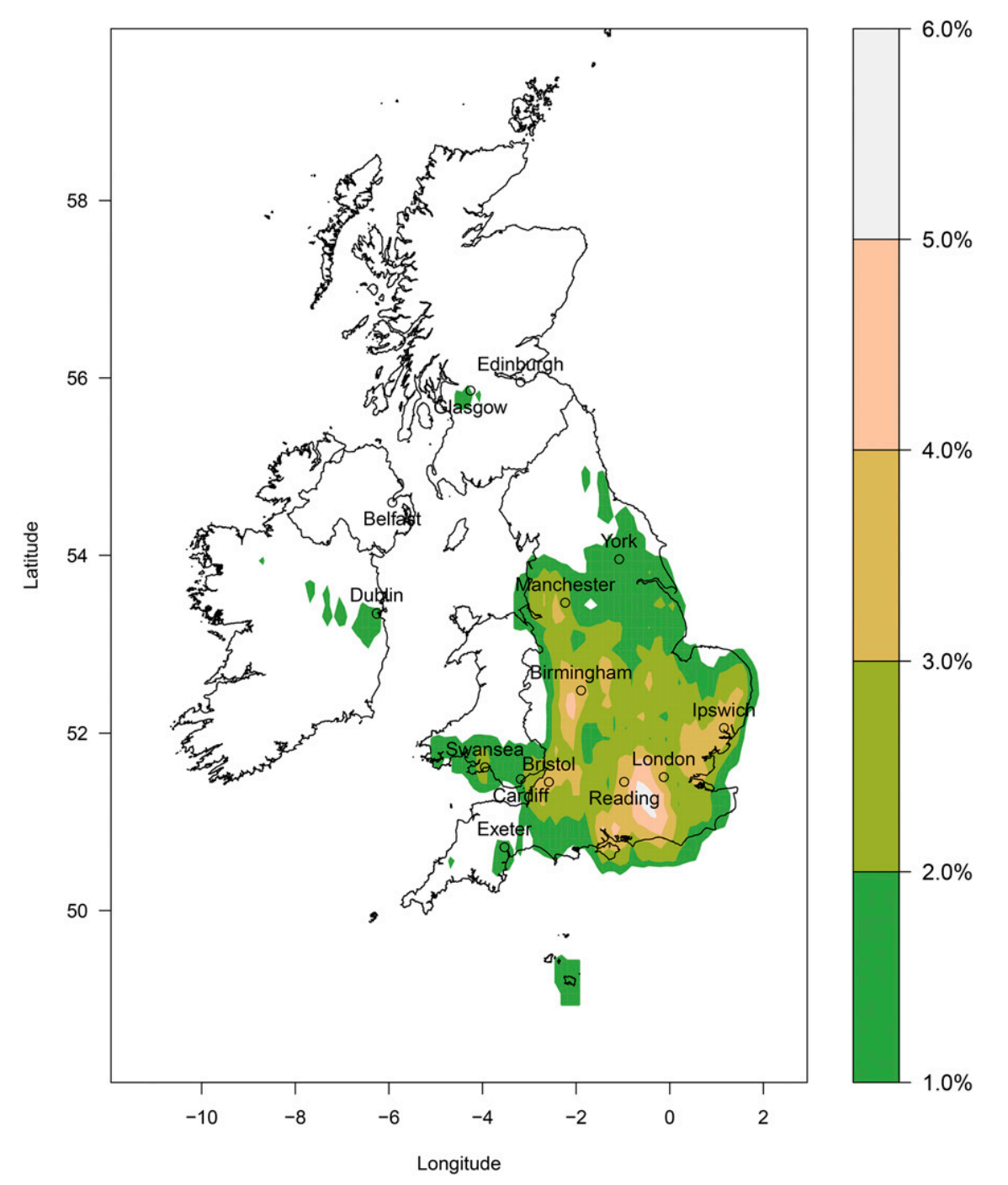 Probability (%) of a tornado occurring in a 10-km grid box across the British Isles per year, using a 15-day temporal and 50-km spatial smoothing parameter (Mulder and Schultz, 2015)

Tornadoes in the UK

On average, 36.5 tornadoes are reported each year in the United Kingdom. This average is based on the 1981-2010 climatological period, though in reality the actual yearly figures may vary dramatically from year to year.

Many tornadoes which are reported because they have been associated with structural damage to a lesser or greater degree. It is likely that many tornadoes are being missed altogether because they travel over fields. No doubt some are seen and reported, but unfortunately the report never reaches TORRO.

In order to accurately compare tornado frequencies between different countries, land area must be taken into account - after all, a large nation will report many tornadoes simply because of its large land area. When land areas are taken into account, the United Kingdom actually has the highest frequency of reported tornadoes per unit area in the world. This was first recognised by an American meteorologist, Dr. T. Fujita, in 1973.

Tornadoes occur across the entire UK but most tornado reports are from England in an area encompassing the Wirral in the NW to East Anglia with relatively high concentrations of reports along the south coasts of England and Wales. A general clustering of events is found in areas such as Bristol, London, SE England, NW England, the West Midlands and the south coast of Wales suggesting a significant population bias. Tornadoes are rarer in Northern Ireland and Scotland.

Tornado near Campo, Colorado on 31 May 2010
(Credit: Paul Knightley) 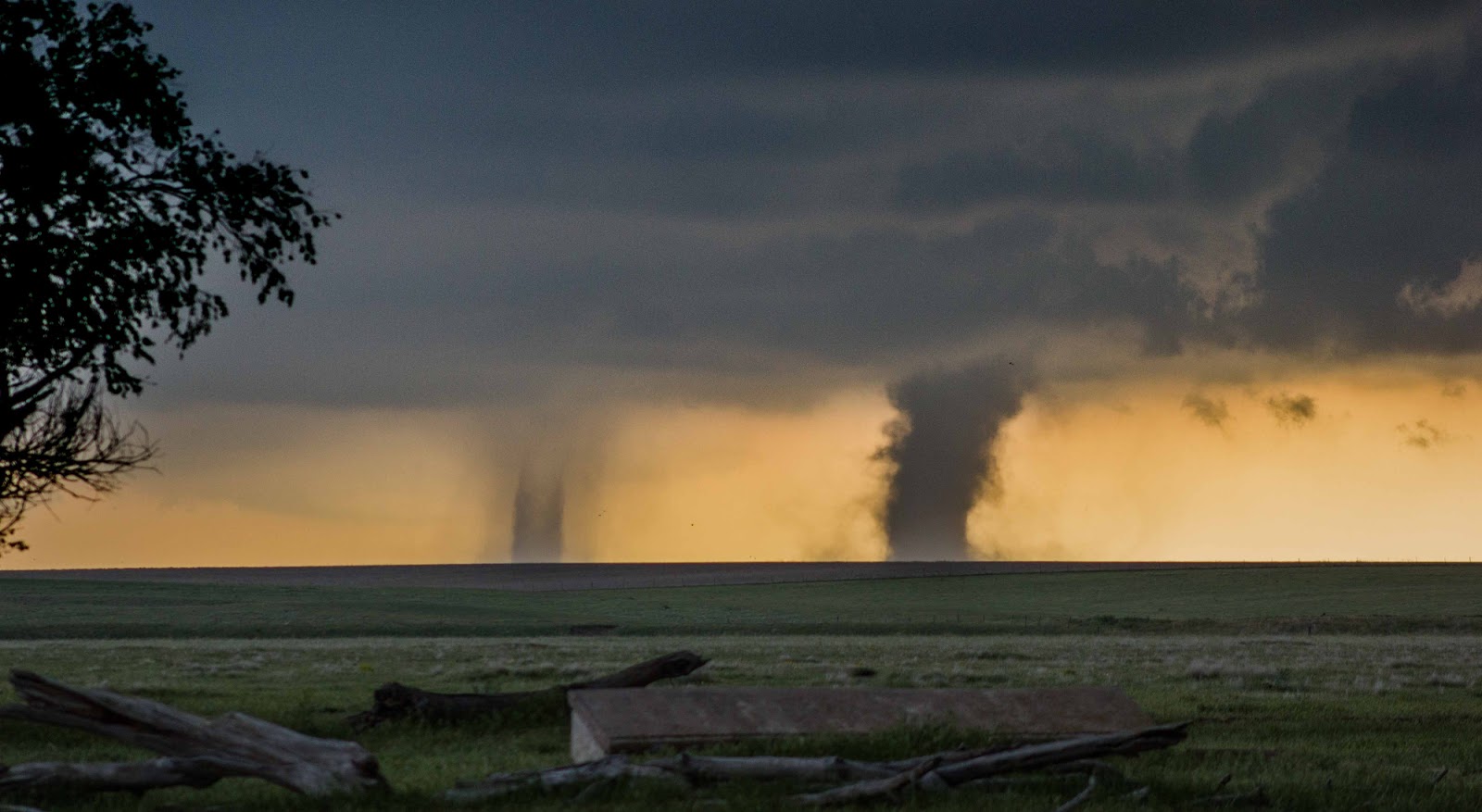 Tornadoes near Cope, Colorado on 28 May 2018
(Credit: Dan Holley)
Most continents have regions where conditions for tornado formation are more likely to develop. In the USA, across a broad zone from Nebraska to Texas and Oklahoma, violent tornadoes develop more frequently than elsewhere. This region has been named âtornado alleyâ. In this zone cold dry air moving south and east from across the Rockies meets warm moist air from the Gulf of Mexico, especially in late spring and summer when the general conditions are optimum. On some remarkable occasions more than a hundred tornadoes have been recorded in a day, not only in the USA but also in the British Isles. In the US on 3-4 April 1974 within sixteen hours in thirteen states from Georgia to the Canadian border there were 148 tornadoes, of which 48 caused 315 deaths. In Britain on 23 November 1981 as many as 105 tornadoes broke out in five-and-a-half hours as a cold front crossed a comparatively small part of England from north-west to south-east. The country with the highest number of reported tornadoes per unit area is England whose area corresponds roughly with Oklahoma, but many of the latterâs tornadoes are more violent. Holland is another small country reporting a very high frequency of tornadoes per unit area. The part of the USA with the highest number of tornadoes per unit area is central Oklahoma.

Tornadoes of North America and Europe have been studied the most, especially since 1970. In the USA and Europe two tornado wind-speed scales have come into use. There is the international decimal T-Scale which ranges from 0 to 9 and is a simple development of the 200-year old Beaufort wind speed scale, and there is the American F-Scale with its shorter span from 0 to 5. In the severest tornadoes wind speeds have been known to approach 130 meters per second or 300 miles per hour. The strongest known tornadoes for the USA and for Europe are T10 or F5 on these scales. Tornado tracks commonly range from a few dozen to a few hundred meters in diameter but can be up to 5 or more kilometers wide. Lengths of tornado tracks exceeding a hundred kilometers are known, especially for the USA.

Some tornadoes form out to sea as strong waterspouts (q.v.) which sometimes cross the coast, so a waterspout may become a tornado as the twisting funnel moves from sea to land (and vice-versa). A recent powerful and well-documented example is that of Selsey on the south coast of England on the night of 7 to 8 January 1998. When the waterspout made landfall, it carved a trail of damage a kilometer wide through the town as it damaged hundreds of buildings in less than ten minutes.

Meaden, GT (1985). A study of tornadoes in Britain, with assessments of the general tornado risk potential and the specific risk potential at particular regional sites. Prepared for H.M. Nuclear Installations Inspectorate Health and Safety Executive.