TORRO maintains a record of the annual total number of reported incidents in the UK of lightning affecting people (both directly and indirectly), houses and other buildings, property, trees, animals and electricity supplies. This total is based on news and social media reports as well as TORRO's network (and other networks such as the Climatological Observers Link) of national weather observers who send in details of lightning incidents in their area. Although there may be many minor incidents which go unreported, the variation in the number of significant lightning incidents each year is highlighted below with 2006 being a particularly harsh year: 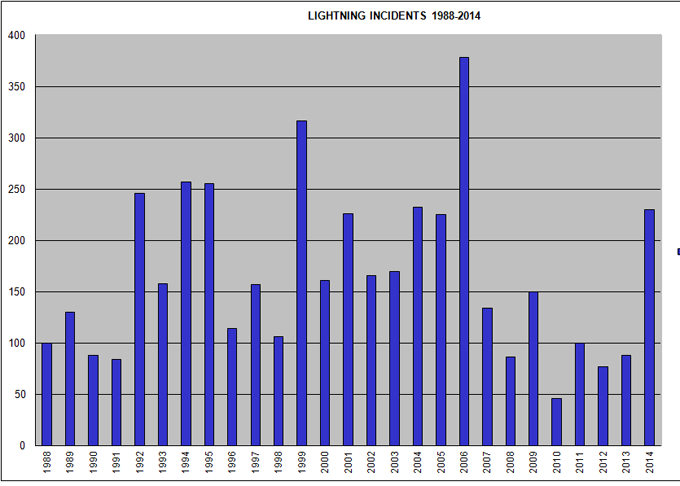 Number of fatalities and injuries

Analyses of lightning fatalities over the past 25 years in the UK shows that, on average, two people are killed by lightning each year and around 30 people injured. Prompt resuscitation of people who have suffered cardiopulmonary arrest due the electric shock of a lightning strike has, on average, prevented another death each year.

Fuller details are available in the article, Deaths and injuries from lightning in the UK, by Elsom and Webb (2014).

Largest groups of people struck in the UK

At Ascot race course, Berkshire, on 14 July 1955, electric shocks were experienced by around 50 people when lightning struck the metal railings opposite the Royal Enclosure. Two people died, one a pregnant woman. Full report.

Seventeen boys and adults were injured when a thunderstorm prompted the group to take shelter from the rain under a tree at a football match for under-10-year-olds around midday at Aylesford, Kent, on 2 September 1995. Lightning struck the tree and side flashed to a large golfing umbrella that one man was holding. Fifteen were treated for minor burns, damage to their eyes and shock, with five detained in hospital. Four had to be resuscitated. Three had serious burns.

During the night of 1 September 1994, 14 teenagers sleeping in tents in a back garden in Tunbridge Wells, Kent, suffered electric shocks when lightning struck the largest tent. Eight were treated for burns and/or shock, with three being detained overnight.

Incidents with more than one fatality in the UK

In the past 25 years, when there have been a total of around 50 fatalities in the UK. Although more than one person has been killed on the same day in separate incidents, as happened on the Brecon Beacons in south Wales on 5 July 2015: BBC News.

Only one incident during the past 25 years is known to have resulted in more than a single fatality. This took place on 22 September 1999 at Hyde Park, London, when two women were struck and killed while sheltering beneath a tall maple tree: The Independent.

Worst years for lightning fatalities in the UK

During the past 50 years, the years with the highest number of lightning fatalities were 1970 with 12 deaths and 1982 with 15 deaths. In comparison, some years in the nineteenth century resulted in a much higher number of fatalities. Official statistics are available only for England and Wales in the earlier years but they reveal the worst years as 1852 (45 deaths), 1872 (46 deaths) and 1895 (43 deaths). This was a period when the national population was around one-third of today's population.

The average annual number of lightning fatalities in each decade for the past century and a half for England and Wales were: The number of fatalities refer only to England and Wales as national statistics for Scotland did not begin until 1951 and Northern Ireland until 1964. Annual fatalities in Scotland and Northern Ireland were typically none, one or two a year. By far the most UK fatalities have occurred in the more thunderstorm-prone England during the past century and a half. Refer to the article by Derek Elsom (2015) for fuller details.

Reasons for a large decrease in the annual number of lightning fatalities since the 1850s:

If you wish to report a sighting of âBall Lightningâ, please use the Severe Weather Report Form.

Where possible include the following details: For further reading on Ball Lightning Research, see: